What is a Hall Effect Sensor? Understanding its Role in an Automotive Motor Control System

Embedded Blog
Home Embedded Blog What is a Hall Effect Sensor? Understanding its Role in an Automotive Motor Control System

What is a Hall Effect Sensor? Understanding its Role in an Automotive Motor Control System

A BLDC motor control system is a complicated circuit where several components work in tandem to make the motor move in a desired manner. Efficiency, Durability and Performance are the attributes that concern the engineers the most while designing such a system.

While the magnets and coils take care of the electrical aspect, a microcontroller acts as the brain that drives the motor. But even the sharpest brain needs sensory inputs.

The two sensory inputs that assume much importance here are Speed and Position. Let’s understand them in the context of motor commutation.

Commutation is the process of switching current in the motor phases to facilitate the rotation of the motor.

In brushed motors, the brushes come in contact with the commutator and switch the current for the movement of the motors. BLDC motors do not have brushes; thus, they need to be driven electronically using a motor control system.

The BLDC motor controller provides the rectangular waveforms (voltage) to the rotor magnets, and create the magnetic field which drives the motor.

Importance of Speed and Position of the Rotor in Motor Commutation:

Commutation in a BLDC motor is a 6-step process. A 3-phase H-Bridge is used to create 6 flow vectors each causing a rotation of 60 Degrees (corresponding to the next position) of the motor, thus making a full rotation of 360 degrees.

There are many types of sensors used in the electric motor industry like Encoders, Switches and Potentiometer. However, the most widely used and deployed sensor is the Hall Effect Sensor.

In the subsequent sections, we will talk in detail about the Hall Effect Sensor and its role in a motor control system.

What is Hall Effect Sensor?

A Hall Effect Sensor is essentially a transducer based on the principle of Hall Effect.

The effect of getting a measurable voltage when a conductor or semiconductor with current flowing in one direction is introduced perpendicular to a magnetic field, is called the Hall Effect.

In simpler terms, a voltage is produced across an electric conductor when a magnetic field is applied to it in a direction perpendicular to the flow of current.

A Hall Effect Sensor is a solid-state device that applies this principle to determine the position, speed and various other attributes required to run a BLDC motor efficiently. 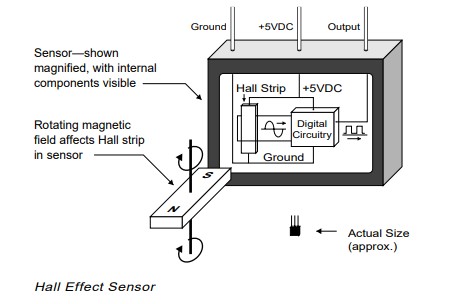 A Magnified View of the Hall Effect Sensor

A small value of current runs through the Hall Strip at all times. As already mentioned, the alternating field from this rotor magnet will create a voltage across the Hall Strip. The voltage is then fed to the digital circuitry (shown in the diagram above), which in turn, gives a digital signal as the Hall Effect Sensor output.

How Hall Effect Sensor Works in a BLDC Motor

Typically, a BLDC motor will have three Hall Effect Sensors fitted on the rotor or the stator. These Hall sensors are placed 120 degree apart from each other, giving 0 to 360 degree angle position.

When these hall sensors come in contact with the magnetic field of the rotor, it generates respective digital pulse in terms of 1 and 0, as shown in the diagram below.

In six steps, these hall sensors are able to give the motor position (Angle). In the diagram, the rectangular waveforms showcase the positive and the negative pulse generated at the corresponding angle by all three Hall Effect Sensors – A, B and C.

A corresponding graph also shows how one commutation is completed in 6 steps as the angle reached 360 degrees. 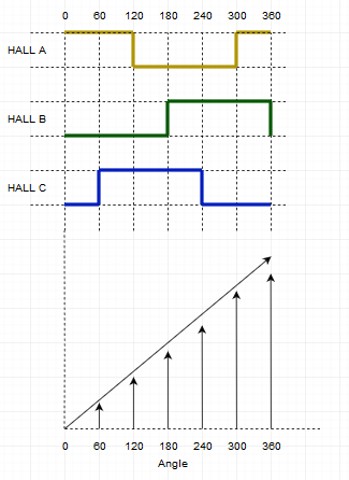 When the rotor magnet crosses one of the sensors, it produces a low or high signal depending on whether it is the North pole or the South pole of the rotor that has passed. As the rotor crosses all three sensors, these sensors switch between low and high, thus giving out the position of the rotor every 60 degrees.

The diagram below shows a typical BLDC Motor Controller. Three lines going from the motor to the controller depict the signal sent by the three Hall Effect Sensors. 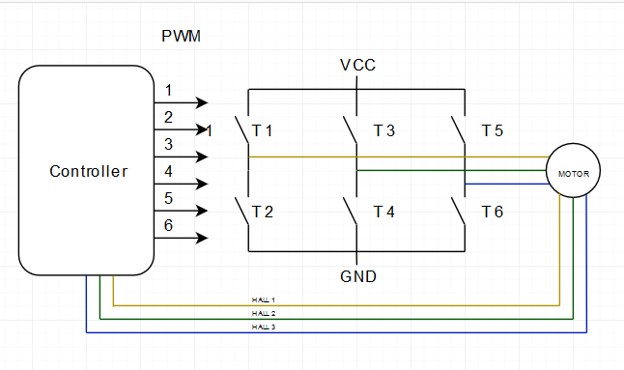 The Hall-effect Sensor is able to distinguish between the positive and negative charge moving in opposite direction. The magnetic field detected by the hall-effect sensor is converted to the suitable analog or digital signal that can be read by the electronic system, usually a motor control system. 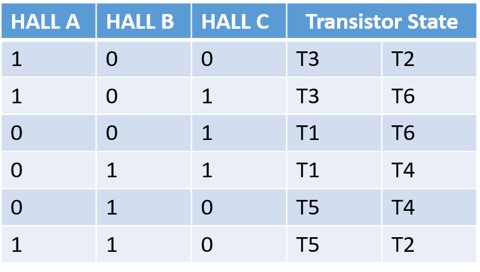 Now that we have the truth table and the graph, the angle (position) and the speed of the rotor can be easily calculated.

Being cost-effective and easy to implement, these sensors have made new-age BLDC motor control solutions more efficient and deployment-friendly in the automotive industry.

Watch this space to know about other such components that play vital roles inside a BLDC motor controller.

Automotive Motor Control System: The Brain Behind the Brushless DC Motors in an Automotive Application

Brushless DC Motor vs PMSM: Find Out How These Motors and Their Motor Control Solutions Work